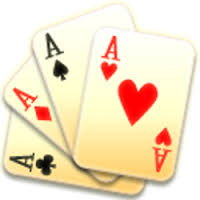 Tarneeb or Tarnib is a game that thousands of users play on a daily basis. With this app you can play Tarneeb with four players split into two teams. Along with your partner, you will have to choose between Tarneeb 31, 41 or 61. Let’s see if you can manage to win! If you do, you can share your winning with your friends. Get a couple of extra rounds whenever you challenge your friends!

In this game, you always need to play your best suit and a bid from 7-12 or a full house (kaboot). Make sure to count your cards, and with any luck, you and your partner might just win! This game can be highly addicting so don’t be surprise if you end up playing till morning!

Introduction to the Game of Tarneeb

Tarneeb is as we already know, a game between four players that revolves around trumps and bidding. It is a popular among Middle Eastern countries and is highly popular in Lebanon, the game’s birth place reportedly. Tarneeb means “trump” in Arabic, hence the name.

There are two particular versions:

The Players and the Cards

There are as we stated early, four players in what is known as fixed partnerships. These partners or teams are always setup so that they are facing each other. A standard international 52-card is normally used in which the cards in each suit is ranked in this manner (from highest to lowest): A, K, Q, J, 10, 9, , 7, 6, 5, 4, 3 and the lowest 2. The game starts. It begins and is normally played in a counter-clockwise motion.

The very first dealer is often times chosen at random. After each hand, the dealer passes to the next person on the right. The cards are shuffled and cut before being dealt out again. Dealing should be done one at a time so that everyone one gets a total of 13 cards each.

How the Bidding Goes

The bidding begins with the player at the dealer’s right and as mentioned continues on counter-clockwise. The bids are numbers which represent the number of tricks the bidder’s team does in order to win the game. The lowest bid is seven while the highest bid is thirteen. It cannot go higher nor can it go lower than that. And to make it even more complicated, each bid must be higher than the bid that was placed last.

A player can choose not bid and their turn can pass. However, once you have been passed you drop out of the bidding which means that you are unable to bid again at a later turn.

If all four of the players choose not to bid (pass), on the first round then then hand is thrown in and the cards are redealt by the same dealer. But if not, then the bidding goes on around the table as many times as it is necessary until all the players but one have passed. Then, the final bidder then announces “Tarneeb” or the trump suit which then leads to the very first trick.

There is also an option for the final bidder to announce that the hand will be played without any trumps.

The final bidder or the one who one the bidding leads to the very frist trick, and whoever wins the trick leads on to the next trick and so on and so forth.

In order to win a trick, the highest trump must be played or by the highest card of the suit if this a hand that contains no trumps.

In order to score, the bidder’s team must try to take at least as many tricks as they are bidding. If they were to bid less than 13 and succeed, they score the number of tricks they were able to win. The other team inevitably scores nothing.

If the bidding team were to take fewer tricks than they bid, then they lose the amount of their bid and it’s the other team that gets a chance to score the number of tricks that they won.

A “kaboot” is what named for winning all thirteen tricks. If the bid was less than 13, “kaboot” then brings an extra 3 points which makes it a total of 16 points rather than 13 only.

If a team bids all thirteen tricks and then proceeds to win them all, they then get a score of 26 points! But if they lose any tricks, then they score minus those 16 points and the opposite team gets to score double the number of tricks that they were able to win.

More hands are played until, finally, one team achieves a total score of 31 points or more and that ends the game.

A game as time-consuming and as addicting as Tarneeb can end up becoming problematic when it comes to playing on your mobile device. This is because of the obvious fact that mobile devices are notoriously unable to be played for very long periods of time without having the battery drained.

In fact, battery life is often drained even if you are playing for long periods! So, you constantly have the worry that you won’t be able to play a good game unless you are safely near an outlet so that you can charge whenever you need to.

Another problem with mobile devices and playing games is that it takes up a lot of space. Oh sure, maybe not one or two games but if you are a gaming enthusiasts with more than a dozen of favorite games that you play on a regular basis then this problem can become a constant nuisance!

You are always looking for ways to save your precious memory space which may include deleting precious pictures, videos, and music files all for the sake of playing your favorite game. This is rather depressing for some and time consuming for others.

How to Solve the Problem

So how do we solve this problem? Is there in fact a way to be able to play your favorite games without being worried about the constant pitfalls of mobile devices?

Good thing, there is! There is a possible solution and the only thing you have to do is go and find Nox App Player!

Because of the simple fact that the things that personal computers have in abundance or the things that are causing problems for your gaming experience if you were to play them on your mobile device.

Computers are chock full of memory space and have extended battery lives well beyond those of your average mobile device. So, on a computer you are complete free to play your favorite Tarneeb for PC without having to worry about all the thing we mentioned before!

There are certain software features that Nox App Player has which will get you really excited to use it:

Download and installation process – One thing that is so convenient about Nox App Player is that it doesn’t take long to setup! With it’s simple directions and overall quick process, you will be playing your favorite mobile games such as Tarneeb for PC in no time at all.
Beginner-friendly interface – Another amazing thing about Nox App Player is that it doesn’t take a genius to use it. Anyone, even a beginner to emulator softwares can operate Nox App Player. It will basically do all the hard lifting for you!
Visuals and sounds – No need to compromise sound and visual quality while playing your favorite games on your computers. You get the same kind of visual and sound experience just like as if you were playing on your mobile devices!
Start from scratch? – No need to worry that you may need to start another game of Tarneeb on PC. Nox App Player syncs seamlessly with your Google Play account and loads your already saved progress from there.
Bonus feature – An added bonus if you download Nox App Player is that you can now use your phone or tablet as a remote control! Which allows you to have the convenience of playing any mobile game using your tablet but with the wide and bigger screen resolution of your PC.
24/7 support team – If you have any questions or in need of some help, you can always head over to the online support group on Facebook and ask there! But if you prefer, you can always drop a quick email instead.
Regular updates – Updates are a constant with Nox App Player as the developers always wish that they can give their users the best kind of product that they can offer. But don’t worry about have to pause or stop a game in order to update the software. Nox App Player does that quietly in the background.

Last But Not the Least

Nox App Player is free to use!

Step 6: Launch the game and you can now play Tarneeb on pc using a mouse or your keyboard and even your touchscreen, you can use the control button to emulate the pinch function to zoom in and out.