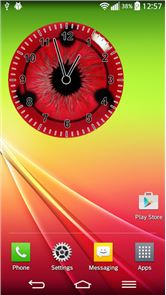 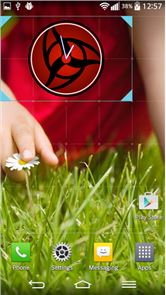 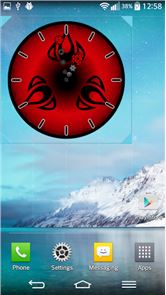 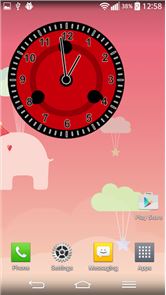 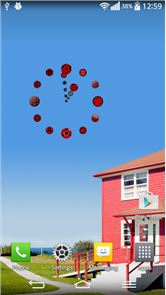 The description of Sharingan Clock Widget

Do you dare to look into the fierce Sharingan eyes? “Sharingan Clock widget” is a brand new “clock widget” inspired by the Japanese combat techniques and the stunning red and black “Sharingan eye”. Your phone or tablet can be the embodiment of the true strength of Sharingan! This “free clock widget” embodies the power of the “magic eye” or Mirror Wheel Eye – just download this Clock widget for Android™ and, enjoy picking various clock skins, faces and hands, for free. We have a great treat for true fans of the Japanese anime or manga characters and comics – you get to choose whether choose whether the red mirror eye of your beautiful widget is only partially developed, with one or two swirls, or fully developed with three swirls or Tomoes. Have fun with your new “Sharingan clock” inspired by the Copy Wheel Eye!

✇ This cool widget lets you make your own “Sharingan eye Clock”!✇ First, you need to ADD “Sharingan widget” to your HOME SCREEN!✇ You should go to MENU and then press the 'ADD' button or, depending on your device, tap the empty space and hold your finger until the pop-up menu-window labeled “ADD TO HOME SCREEN” appears (you might need to find + BUTTON, or the option 'WIDGET' to add it to home screen).✇ When you download the Sharingan clock, initially you get five widget faces, while the rest of them unlock over the next five days.✇ Make your own clock – choose from 10 hypnotic Sharingan designs of clock skins, hands and digits!✇ Tap on the Sharingan eye to scale and move your new analog clock!✇ Set the alarm clock by swiping through the digits on the screen and tap on set alarm button!✇ The powerful magic eye only is not only a beautiful widget, but it also saves your battery!✇ This cool analog clock has easy and fun interface and great choice of clock faces!✇ “Sharingan Eye Clock Widget” looks amazing on tablet devices as well as on mobile phones.

Enjoy the powerful Sharingan widget, made purely for your pleasure! All you need to do is to give this free download a chance and be amazed by the abstract, yet sophisticated design. All comic and cartoon lovers will certainly appreciate one of the best cool gadgets inspired by Mirror Wheel Eye!You can choose the design of your very own Sharingan eye as well as the number of Tomoe or blades around the pupil with this easy clock widget. Be prepared for a counter strike at all times with one of the most “beautiful clock widgets free”-”Sharingan Clock Widget”!Your new beautiful clock widget allows you to resize or move it, as well as set an alarm, for FREE.One of the Three Great Eye Techniques, also known as Heaven's Eye can beautify your phone. Have you always wanted a cool set of Sharingan contacts that would inspire awe and make your eyes look fierce? Here's the next best thing, this customized “digital clock widget” is ideal for you if you always dreamed about mastering both of the Sharingan's abilities – the Eye of Insight as well the Eye of Hypnotism.Be prepared to counter strike at any given moment and be inspired by this stunning Japanese combat technique and the Sharingan eyes!The Uchiha clan members, as well as the other users of Sharingan, have the ability of hypnosis that involves suggesting actions to the opponent through genjutsu by a mere “eye contact” – admire this and the ability to predict the opponents' next move and to counter-attack without any wasted movement. Also, the magic eye allows you to memorize ninjutsu, genjutsu, and taijutsu with near-perfect accuracy, did you know that?! Always be prepared to counter attack with this clock widget for Android™ – best FREE widget on the market! All fans of Sharingan wallpaper know that it allows you to see the flow of chakra, as well as to read lip movements or mimic something, but you can be the first one to download cool“Sharingan Widget”.

* Android™ is a trademark of Google Inc* This widget is ad-supported.

How to play Sharingan Clock Widget on PC